The nematode model organism C. elegans is a promising system to specifically investigate unconventional functions of type 1 paracaspases since it lacks CARD-CC, Bcl10 and NF-κB. Despite the lack of known upstream and downstream proteins in the signaling pathway, the WormBase C. elegans phenotype database indicates an important role for the type 1 paracaspase with a “lethal or sterile” mutant phenotype (tm289 vs tm321) in nematodes.  In order to investigate this further, we let C. elegans grow on plates expressing an RNAi construct against the C. elegans type 1 paracaspase F22D3.6. We silenced this gene systemically in the wild type strain N2 (all tissues except the neurons) and in a strain hypersensitive to neuronal RNAi (TU3311)

To test whether RNAi inactivation of F22D3.6 is accompanied by neurotoxicity, we performed a motility study with the WMicrotracker. A 24-well, filled with nutrient agar, was used. To prevent progeny, FUdR (200uM) was added before worms became adult.  6 wells were seeded with the control RNAi bacteria (empty vector L4440), 6 other wells were seeded with the RNAi bacteria against F22D3.6. Neuronal RNAi sensitive worms (TU3311 strain) were grown on RNAi bacteria until young adulthood (day 0). Around 100 adult worms were inoculated in each well. Three independent biological replicates were measured over a time period of 20 hours. The detected signals per hour were divided by the average worm number over the wells. The difference in motility was expressed relative to the control.

While systemic knockdown of  F22D3.6 showed no effect on lifespan, strong silencing of this gene in the neurons caused a slight but significant reduction of lifespan  (p < 0.05,Figura 6 A, B ). This result hints a vital role of this paracaspase homolog in the C. elegans neurons. Remarkably, silencing the paracaspase knockdown in the neuronal RANi hypersensitive strain caused increased motility (Fig. 6C). This highlights  an important role  for CBM-independent type 1 paracaspase functions and  indicates that further  investigations on the role and function of F22D3.6 in C. elegans could be highly interesting. 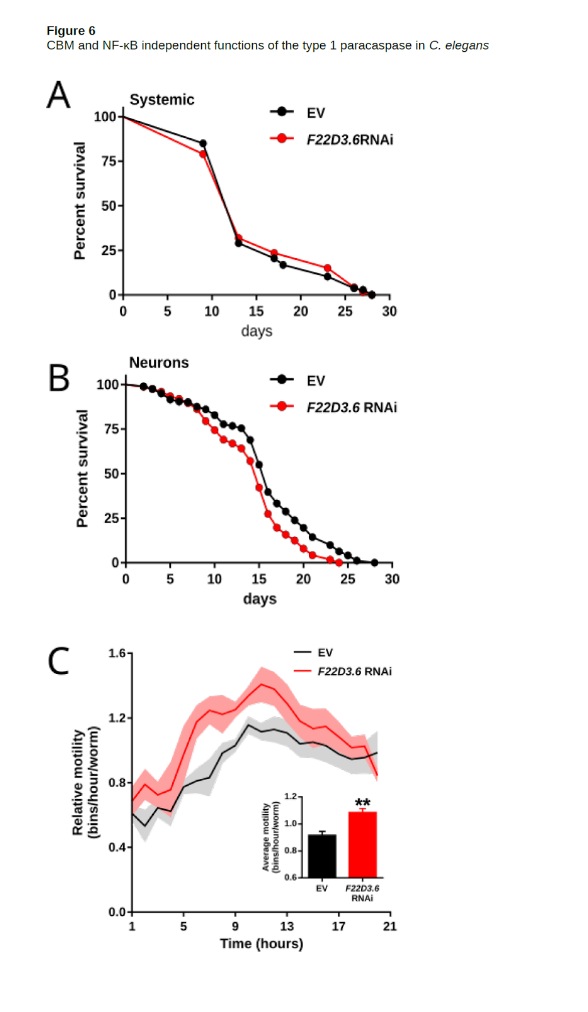