For the past 40 years or so, oxidative stress has been increasingly recognized as a contributing factor in aging and in various forms of pathophysiology generally associated with aging. Research in C.elegans has contributed to understand many factors involved in aging, as well as the discovery of new molecules that help to reduce free radicals and oxidative stress damage.

Using WMicrotracker, it is possible to easy emulate pharmacologically oxidative stress and measure the effect of new small molecules, genes or natural compounds. Below we present an example of application. 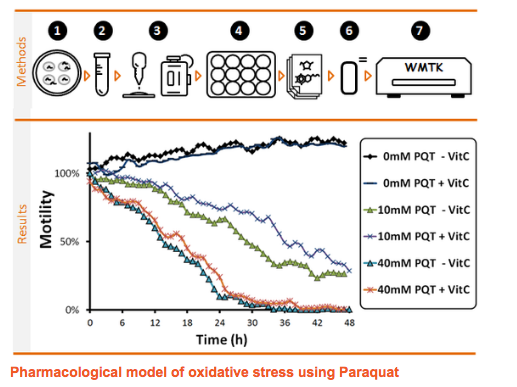 In this experiment we can observe the dynamics of oxidative stress model, and a small protective effect of C Vitamin when worms are exposed to 10mM of Paraquat.