Phototoxicity consists in the capability of certain innocuous molecules to become toxic when subjected to suitable illumination. In order to discover new photoactive drugs or characterize phototoxic pollutants, it would be advantageous to use simple biological tests of phototoxicy. In this work, we present a pilot screening of 37 dyes to test for phototoxic effects in the roundworm Caenorhabditis elegans.

One hour after pipetting, basal motility of worms within the wells was assessed using an infra-red tracking device (WMicrotracker) .  This basal activity was recorded to normalize any subsequent activity variations to that initial activity, eliminating differences between wells due to population size. After basal measurement, dyes were added to the culture medium at final concentrations of 0.1, 1, 10 or 100 μM and incubated for 1 h before light irradiation (where applied). Dye photoactivation was carried out exposing the microplates for 30 min under a fluorescent white light source (2700°K white fluorescent lamp R7s 20W, Sica, Argentina) at 10 mW/cm2 of intensity. An additional water IR-filter (3-cm wide) was used to avoid heating, as previously reported. Two well characterized dyes were tested, Luxol fast blue (not phototoxic) and rose Bengal (aphotoactive molecule). Then, other 35 dyes were tested.  Locomotor activity was tracked continuously in darkness during the incubation with the dye and for 4 h after dye activation. At least 4 replicate wells were used for each experiment. 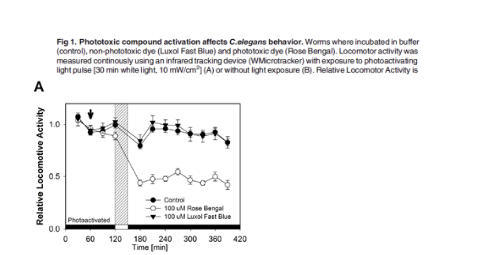 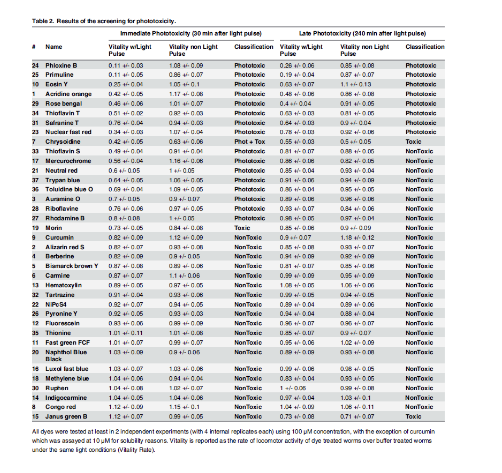